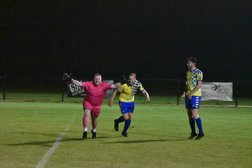 After a morning of torrential rain, the pitch was still looking decent at The Greenfleets Stadium, as Dynamos looked to build on their recent FA Vase victory. Playing a back three, with Jack Hodgins, keeping his place and Luke Nugent coming into the starting line-up, Dynamos needed 3 points in the league to kick start their season.

Callum Shortt was first to have an effort as Montel Brown squared the ball to him, however, his shot went over the bar. At the other end the MK Irish striker had an early sighter too, which went wide of the far post. With just under 10 minutes came the first real chance. A ball down the left wing from Dave Brown saw Callum Shortt race after it, keep it in, and advance on goal. His shot was parried for a corner. The corner was met by Terry Griffiths, but over the bar.

MK Irish then also had a good chance, but Paolo Bagatti made a great tackle before they could cross the ball. 18 minutes and the referee agreed with the crowd as the MK Irish keeper collected a back pass, picking it up. Indirect free kick given but Jake Baldwin couldn’t hit the target. The keeper wasn’t having the best of games and a long clearance from Dave Brown bounced over the keeper, but wide of the mark…that would have been embarrassing for him….(keep reading!!).

28 minutes on the clock and Alfi Touceda was fouled on the right side of midfield. The resulting free kick was swung in by Luke Nugent and Paolo Bagatti jumped the highest and blasted a header just wide of the post. MK Irish were also chasing the first goal and after a chance that went wide of Dan McAteers post, Terry Griffiths was on hand to make two fantastic blocks as MK Irish threatened. With just over half an hour played….comedy moment of the season…surely…! A ball was played back to Dan McAteer who launched a long ball which was over-hit…however, the visiting keeper came, stopped, stepped back…and watched the ball bounce over his head and straight into the goal. Cue celebrations not seen for a while at Haywood Way…great…ummm…goal Dan McAteer…! 1-0 Dynamos.

38 minutes and a bad tackle in the middle of the park on Alfi Touceda, saw Davide Pobbe and the MK Irish player see red, literally, as an altercation saw both players given their marching orders. It would be 10v10 for the remainder of the match. Moments before half time, Callum Shortt was shown a yellow for kicking the ball away.

Jake Baldwin had picked up an injury late in the first half and was replaced by Dan Ball on the left wing back position. Dynamos needed a strong start in the second half, but before half the crowd had made it back out, MK Irish had gone down the Dynamos left flank, crossed and scored within 35 seconds of the re-start. 1-1. Within 2 minutes, Dynamos were back in the lead. Dave Brown collected a ball out from Jack Hodgins and beat his man, then played a sublime ball, splitting the defence and Dan Ball was through on goal. He picked his spot and beat the keeper with ease for his first goal in a Dynamos shirt and making it 2-1 Dynamos.

53 minutes and Dynamos were on the front foot. Alfi Touceda played a ball to Callum Shortt who beat his man and hit a decent shot to the left of the keeper. He got a hand to it, but couldn’t stop it going in. Dynamos top scorer had scored again for his 4th of the season. 3-1 Dynamos.
On the hour mark, MK Irish were still in the game, and only the outstretched hand of Dan McAteer stopped them getting back into the game with a great save.

62 minutes and Gael Muyonge was introduced for Montel Brown. Five minutes later Gael was straight into the referees book as he pulled an opposition shirt. 73 minutes and MK Irish were threatening again, a Dave Brown foul resulted in a free kick which Dan McAteer saved low to his left. With 10 minutes remaining Callum Shortt played the ball to Gael Muyonge and he battled well to win a corner. Gael swung the ball in but it just eluded Jack Hodgins at the back post.

At the other end MK Irish faired better from a corner which was converted as Dynamos didn’t clear. 3-2 Dynamos. 86 minutes and Alfi Touceda, still full of running, played in Luke Nugent who was taken out and a resulting yellow card for MK Irish. The final action of the match was a heart in mouth moment as MK Irish searched for the equaliser. They worked the ball into the box and hit a good shot but Dan McAteer was equal to it and made a vital save, right at the death.