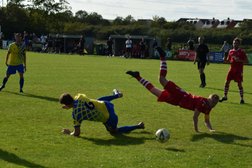 Disappointing start to the season...

The long awaited first league game was upon the Dynamos team and Phil Granville announced his starting team. Phil was without stalwart Ben Stevens and also the influential Ben Gill today but had everyone else available. Within the first minute Dynamos created a half chance as a ball over the top from Alex McGowan nearly saw Lewis Workman in on goal. The Baldock keeper was just there first.

A few minutes later and a miscued clearance from Sam Austin saw the alert Jake Baldwin clear off the line to stop an early goal. The next 10 minutes or so saw both teams struggle to get their foot on the ball in a somewhat scrappy opening quarter of an hour. The only chance to note was when Kevin Owusu was clattered into and the resulting freekick saw Charlie Jackson almost catch the keeper out but he just collected the ball.

Dave Brown was at the centre of the action in midfield and a drive forward saw him create room and hit a long range effort which went wide of the mark. A few minutes later and Dave Brown was on the ball again and this time he was fouled. Another Charlie Jackson freekick was headed clear by the defence. 23 minutes and the opening goal arrived. A speculative long range effort from Paul Morris was cruelly deflected past the helpless Archie Davis and Baldock were 1-0 up.

The Dynamos were back on the attack and Alfi Touceda played the ball wide to Dan Wilson, making a rare foray over the half way line. He managed to get his cross over and Kevin Owusu tried an audacious over head kick but lacked the power to beat Robbie Ponting in the Baldock goal. With half an hour almost on the clock, Charlie Jackson created a great chance for Lewis Workman as he clipped a ball over the defence finding Lewis through on goal. Robbie Ponting came out of his goal and Lewis calmly lobbed the ball over him and into the goal. 1-1.

It was Baldock that upped the pressure after conceding and Alex Coppin hit a great shot which clipped the cross bar and goes over. Lucky escape for Dynamos, however, less than 2 minutes later Ben L'Honore received the ball, spun and hit a shot over Archie Davis and into the far corner of the goal. 2-1 Baldock. Just before half time Zach Decker managed to find room in the Dynamos box and hit a shot which Archie Davis was equal to, making a low save to his left and the ball was smashed clear by Sam Austin.

Phil made a tactical change at half time taking Dan Wilson off and putting Alife Gaspar onto the field. Dave Brown shuffled over to right back to allow Alfie into his familiar right side midfield role. The Dynamos started brightly in the second half, Dan Lambeth, who had not had much joy in the lone role up front in the first half, was played in by Sam Austin down the right flank. He swung in a low cross but the Baldock defence cleared their lines before Kevin Owusu could get on the end of it. At the other end a corner from Baldock was met by Aeden Gaffney but Charlie Jackson was on hand to clear off the line...lucky escape for The Dynamos.

Just on the hour mark a long ball over the top by Josh Furness saw a foot race between Alex McGowan and Paul Morris with the Baldock striker eventually getting the ball and his sidefoot shot beat Archie Davis to score their vital third goal. 3-1 Baldock. Aylesbury were still creating chances and soon aftetr Kevin Owusu played a reverse pass to Jake Baldwin who was galloping forward and his shot was well saved by Robbie Ponting. At the other end the Baldock right winger was getting a lot of the ball but was coming up against Jake Baldwin who was winning the battle and clearing his lines well.

68 minutes and a long ball from Baldock saw Archie come off his line and handle the ball outside his area. The linesman flagged, the referee ran over and awarded the free kick...luckily no further action taken against Archie...phew...! The resulting free kick was cleared for a corner and the corner came in, no Dynamos clearance and Ben L'Honore was on hand to nod the ball home and put the match well out of sight. 4-1 Baldock.

Phil Granville made two more subs bringing on Darnell Ramsey for Lewis Workman and Luke Beckwith for his debut for the home side, replacing Kevin Owusu on the left side. Baldock kept up the pressure and were looking to add to their tally, but Jake Baldwin was on hand a number of times to clear the ball getting a foot or a head on anything that came his way. However, he was yellow carded late on for a shirt pull, but the free kick led to nothing as Alex McGowan cleared well.

With less than 5 minutes left, Alfi Touceda played the ball through to Luke Beckwith and he jinxed past a challenge and hit a shot across the keeper, but he was equal to it and caught the ball well.

A disappointing performance and result, but we go again on Tuesday night under the floodlights at Haywood Way!