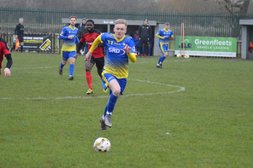 The Dynamos were back at Haywood Way, 3 days after the Harefield match and the pitch had “just” passed its pre-match inspection. It had now been 7 matches without a win for Dynamos (4 losses, 3 draws) and Phil Granville made 5 changes to the starting line up.

Three new signings made their first starts this season with old stalwart, Ben Stevens, returning to the club from retirement and Kuda Butawo both starting. Ollie Leach, from MK Dons, also started at left back after an impressive substitute appearance on Saturday.

It was Eynesbury who were out of the blocks quickest on a very cold night testing James Weatherill in the Dynamos goal after only a couple of minutes, but James was equal to the shot and saved well. A few minutes later and Roy Byron won the ball and was fouled in the process. Joseph Fitzgerald took a quick free kick and set Abu Khan running off down the right wing. His trickery won a corner for Dynamos but it was cleared.

However, Aylesbury kept the pressure up and less than a minute later Joseph Fitzgerald won the ball in the middle and found Kuda Butawo free, he played in Jake Baldwin, who beat the offside trap, and finished with a superb shot beating the keeper at the near post. That was his 3rd goal in 2 matches and put Dynamos 1-0 up. 9 minutes in and Alfie Gaspar played Jake Baldwin in again, but this time a great tackle from Eynesbury player stopped Jake getting his shot away. Jake was looking lively already and the 3 players behind him, Alfie, Abu and Kuda were all causing the Eynesbury defence problems.

Eynesbury then had 10 minutes of good pressure. First Ben Stevens deflected a cross for a corner and the Eynesbury were unlucky as they got a shot away which James Weatherill saved at the second attempt, on the goal-line. 5 minutes later it was Dan McAteer who got in the way with another well timed tackle. This time Eynesbury made the corner count as a short corner allowed their nippy winger time to step into the box and fire past James Weatherill making it 1-1.

24 minutes and it was Eynesbury looking the more likely but again Dan McAteer stood firm and blocked the cross. This time the resulting corner came to nothing. However, a few minutes later Dan McAteer was involved in a crunching tackle which proved costly for him as he was unable to continue due to a knee injury. Lewis Merriden came in to right back from the bench.

As Eynesbury continued to press the pace of Ollie Leach was impressive as he was called upon more than once to make up ground, which he did with ease and cleared his lines. Lewis Merriden was straight into action as a great one-two with Abu Khan saw Abu’s cross blocked for a corner. Craig Carby got on the end of the corner but was adjudged to have fouled. Straight down the other end and Craig Carby was then called on for his defensive duties as he cleared off the line as James Weatherill was beaten. Ollie Leach then finished the clearance.

43 minutes and Joseph Fitzgerald was again the architect as his ball found Jake Baldwin and his shot hit the hand of the Eynesbury defender. The referee had absolutely no hesitation and gave a penalty to Dynamos. With Bruno Brito not available, who would take the penalty. Again…no question as our young striker, Jake Baldwin, grabbed the ball, placed it on the spot and smashed an unstoppable penalty into the top left corner…2-1 Dynamos.

The second half was a cagey affair as both teams struggled to keep possession on the now cut-up, muddy pitch. However Ollie Leach won the ball well and moved forward, finding Abu Khan on the right, he in turn played in Lewis Merriden who had overlapped superbly but his shot went wide of the mark.

51 minutes and Jake Baldwin found space on the left flank and he swung in a cross which eluded all and went just over the bar. It was becoming a midfield battle now and Joseph Fitzgerald and Roy Byron were bossing it and tackling well. 65 minutes and Dynamos looked to be tiring. Eynesbury moved forward, won a corner and the resulting header went over the bar…a warning for Dynamos. Phil Granville then rolled the dice with a double substitution. Alfie Gaspar and Ben Stevens came off and Dan Wilson and Harry Scott came on.

Then both teams had excellent opportunities to score. First Abu Khan played in Jake Baldwin, on a hat-trick, but his shot was well saved. Moments later at the other end, Eynesbury attacker beat the offside trap and with only James Weatherill to beat, his shot beat James but went inches wide of the far post. 87 minutes and Eynesbury were through again, but the lightning pace of Ollie Leach meant he caught his man, made the tackle and cleared the ball superbly.

Dynamos players and fans hearts were in their mouths in injury time as Dan Wilson fouled the opposition on the edge of the area, picking up a yellow card in the process. The resulting free kick, in a dangerous position, was hit well but a few feet over the bar.