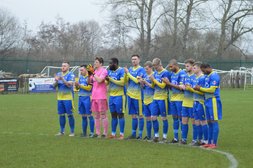 After the weekend's postponment this was the first game for the new management team, headed up by Phil Granville. Bruno Brito and Harry Dalton came back into the starting line up with Keith Mupfururirwa dropping to the bench.

On a lovely Creasey Park pitch it was a much more positive attitude that seemed to be coming from the Dynamos squad, right from pre match in the warm up, the players seemed more vocal and together as they preapred for what was going to be a tough game against their local rivals. That fresh and positive attitude could be seen straight from the kick off with the ball finding Harry Dalton on the right flank, Dalton took on the full back and whipped in a low cross which was cut out by the home defence.

Dunstable then went up the other end and a ball across the face of the Dynamos goal was fired over the bar from Luke Little. James Weatherill then made a save from point blank range to keep the scores level. Aylesbury took the lead on eleven minutes when after another attack down the right ended with a corner which Harry Scott whipped in, the ball bobbled around the area but eventually fell to the impressive Lewis Merridan who fired home for his first goal of the season.

The home side were having the majority of the possession but Aylesbury, with a renewed vigour around the side, were closing down the opposition all over the field and breaking up any attacking play. Lewis Merridan was having an excellent game, battling in the middle of the field but also linking play and driving the away side forward.

The second half began much as the first half with Aylesbury on the attack, almost straight away Alfi Touceda played a ball into Bruno Brito on the left edge of the box and the striker fied a first time shot which stung the hands of keeper Dan Gould.

The all action closing down style was having an impact as the half progressed and Aylesbury appeared to tire a little as the home side came more into the game and started to create chances as they were striving for the equaliser. On sixty five minutes James Weatherill made an unbelievable stop from Smith-Read who poked the ball towards goal from about ten yards but Weatherill arching and bending managed to get down low to this right and tip the ball onto the post and away.

Aylesbury were reduced to ten men after seventy minutes when Dan Macateer was sin binned for foul and abusive language, Bruno Brito moved to left back and the side held firm until Mcateer's return ten minutes later. Dunstable had one final chance to equalise right at the death when Smith-Read, put through came up against Weatherill who smothered the shot and ensured that Phil Granville's reign got off to a winning start