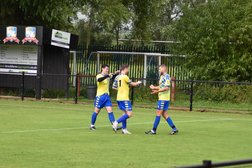 A few new faces and a few still missing as Dynamos entered into their last pre-season friendly against Old Bradwell.
In the first minute Ollie Lemon, deployed on the right wing back role, raced clear and hit a cross which eluded Joe Oxley in the middle.
5 minutes in and Tom McElroy wins and takes a free kick which hits the wall and out for a corner which was cleared by Old Bradwell.
Less than 10 minutes played and Dynamos took the lead. Dan McAteer picked out a long ball straight over the defence and onto Joe Oxley, who controlled and fired it past the keeper. 1-0 Dynamos.
Next up Charlie Ogle swung a decent corner in which was cleared as far as Davide Pobbe who volleyed back but the ball went over the bar.
16 minutes and Old Bradwell broke the offside trap and through on goal, Dan McAteer came out and made a great save as the feet of the striker. Less than two minutes later and McAteer was in action again making an even better stop as Old Bradwell threatened.
24 minutes and the pressure told as Old Bradwell came forward and their midfielder wasn’t challenged as he strode forward and unleashed a decent shot into the far corner. 1-1.
A minute later and they were through again, and yet another 1 on 1 that Dan McAteer was equal too as he came out and made a superb save and Dan Ball cleared up before Old Bradwell could score.
Ollie Lemon, who was looking lively, combined well with Tom McElroy as he set up Will Salmon who hit a shot inches wide of the far post.
It was Ollie Lemon again causing problems as his trickery resulted in a free kick. Charlie Ogle stepped up but smashed against the wall, the ball spun up and Callum Shortt volleyed a shot just over the bar as Dynamos looked to take the lead again.
Just before the break it was Callum Shortt again finding space for a shot which was well saved.
Half Time 1-1
Will Salmon, Tom McElroy and Dan McAteer all made way at half time for Will Foley, Chris Shennan and Arvy Kacinkevicious.
After a few minutes, Old Bradwell had a corner which was swung in but Callum Shortt cleared off the line and Will Foley completed the clearance.
Chris Shennan then made a great run down the left side and beat his man swinging in a cross into the box, but no one was there to attack the ball.
Shennan was having a good few minutes as he broke through and with the keeper well off his line, he lobbed it over, but the ball went inches over the bar…unlucky.
58 minutes and Luke Nugent came on to replace Davide Pobbe.
Next up Joe Oxley controlled well and took on to players but was taken down in the process. Ollie Lemon stepped up but his free kick was blocked by the wall and cleared.
At the other end a last ditch tackle from Dan Ball saved the day with a well timed effort to win the ball.
71 minutes and trialist Joe Mistretta came on for Joe Oxley as Phil Granville shuffled the pack.
Charlie Ogle, now operating a lot higher up the pitch was causing Old Bradewll problems. He sprinted past his marker and hit a cross which Chris Shennan just got his head to, but went wide of the mark.
Mistretta was seeing a lot of the ball on the left and he played a great ball through to Chris Shennan who was through again, but his shot was well saved.
On 80 minutes Old Bradwell won a free kick 25 yards out. The free kick was saved by Arvy but spilled and the striker nipped in to tuck the ball away. 1-2.
83 minutes and the final sub saw Jamie Carter replaced Charlie Ogle.
Old Bradwell then had a great chance to increase their lead but Paolo Bagatti was there to make a great tackle.
The last chance of the game saw Jamie Carter find Chris Shennan and his shot was well saved and the ball came out to Mistrella, but he couldn’t connect.
Fina score 1-2
Share via
FacebookTwitter
https://www.aylesburyvaledynam
Recent news