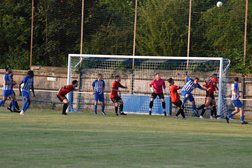 On a very hot and sticky evening in deepest Hayes, Dynamos had their next pre-season friendly against a decent AFC Hayes team. Phil shuffled the pack again to see some more players in action, including Joe Oxley on trial with Dynamos after an impressive game for Tring at the weekend.

The first few minutes both teams were getting used to conditions and moving the ball around. Terry Griffiths found Dan Wilson going forward on the left flank, but he was taken out with a crunching tackle. The resulting free kick was swung in by Ollie Lemon, but Paolo Bagatti’s header was wide. Paolo Bagatti was straight in action at the other end as the Hayes striker went through but a great last ditch tackle from Bagatti cleared the danger. A few minutes later Hayes again attacked but this time their shot went over the bar. Dan Lambeth had his first half chance on 16 minutes but his shot went over the home bar as the Dynamos started to take control.

On 18 minutes the Dynamos got the deserved breakthrough. Dan McAteer with a now trademark long ball to Dan Lambeth, who controlled it superbly, beat his man and hit a great shot which was well saved. Ollie Lemon was on hand to pick up the loose ball and smash it home. 0-1 Dynamos. Moments later it could have been two as Matty Chew won the ball and found Joe Oxley, he spun his man and hit his shot but the keeper saved well.

Aylesbury were on top and had another great chance as the lively Callum Shortt broke the offside trap and his curling effort was palmed away by the Hayes keeper. On the half hour mark Hayes, who had weathered the storm had a couple of half chances but Dan McAteer saved one and Paolo Bagatti (again) with a superb tackle to clear for a corner as Hayes attacked. 35 minutes and Hayes got the chance they deserved, a corner found its way to their striker who was 5 yards out and he hit a low shot into the corner, however, Dan McAteer threw himself down and made a fantastic save at his near post to deny a certain goal. As the clock hit 45 minutes, referee with whistle in hand, the away side failed to clear the ball and a decent cross was headed in from point blank range to level the score up.

Matty Chew and Luke Nugent were replaced at half time with Will Foley and Dan Ball. Will Foley was straight into the action winning the ball and picking out Callum Shortt who hit a good shot but a couple of feet wide of the mark. It was Callum Shortt again who was close to getting another Dynamos goal, Ollie Lemon produced a decent cross from the right, Joe Oxley headed on and Shortt hit a great volley which the keeper pushed away. Great build up, and unlucky not to take the lead. 55 minutes and Ollie Lemon was replaced by Charlie Ogle. A few minutes after his introduction, the tricky feet and skill of Charlie created an opening and he slid the ball inches away from Dan Lambeth. It was Charlie again the creator as his speed created the space to hit a cross which landed between Joe Oxley and Dan Lambeth and just about cleared before Tom McElroy came steaming in.

Half an hour to go and Hayes had two decent attacks, the first was headed clear by the commanding Terry Griffiths and the second saw Paolo Bagatti make another huge interception, tackling well and clearing the ball to Dan Ball. 66 minutes and Paolo Bagatti and Joe Oxley were replaced by James Young and Jack Hodgkins. Both teams were pushing to get the lead and it was Aylesbury who succeeded. Charlie Ogle, now on the left, battled well to win a corner. He swung the cross in and Terry Griffiths was on hand to head the ball home. 1-2 Dynamos.

At the other end it was Will Foley who was on hand to complete a great tackle as Hayes went after another equaliser. With 10 minutes left Dan Ball moved forward and passed inside to the lively James Young. He controlled the ball and unleashed a great effort which went wide of the mark. Will Foley then had a half chance himself which was saved and minutes later was the architect to set up Dan Lambeth but his shot was deflected inches wide of the post for a corner.