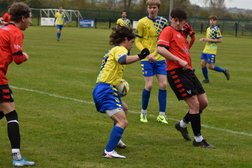 Much needed run out for both teams

The club had an internal match this afternoon between the first team and the North Bucks team to give both teams a much needed run out before they start competitive football again next week. The first 10 minutes both teams struggled to keep possession and minimal goalmouth action with only a snap shot from Dan Lambeth to note.

The deadlock was finally broken when Alfi Touceda found Dan Lambeth free and his pass saw Dave Brown though on goal and he slotted the ball past the keeper to make it 1-0. Seven minutes later and the 1st team doubled their lead when Lewis Workman combined with Jake Baldwin and the latter beat the keeper to make it 2-0.

Dave Brown almost made it 3-0 when he collected a ball out from Linus Kusi and turned hitting his shot over the bar. With 5 minutes left before half time, Dave Brown found Ollie Lemon and with no challenge coming in, smashed an unstoppable shot 25 yards out into the top corner. Fantastic goal ! 3-0 and the 1st team were cruising.

Both teams made a couple of changes at half time with the use of rolling subs, this was so all players got a decent amount of time on pitch.

It was soon 4-0 when a corner, swung in by Emmanuel Gbejuade, was missed by the defence leaving Terry Griffiths free to tap in from close range. The North Bucks team has a rare foray forward and a superb ball over the top saw Stephen Lindsay through on goal but Dan McAteer got a finger tip to it to save well. The resulting corner was headed over. With 69 minutes on the clock a ball out wide by Sam Austin found Kevin Owusu who tried an audacious 35 yard shot, beating the keeper, but going a few feet over. Close…!

A couple of minutes later and Alfi Touceda won the ball and played it to Jude Guest-Brainch. He controlled and threaded the ball to Jake Baldwin who took one touch and beat the keeper into the far corner. 5-0. 82 minutes and the fitness of the 1st team was evident as Luke Nugent was the provider after collecting a pass from Emmanuel Gbejuade. He found Junior Gyamfi who happily skipped past a couple of challenges and slotted the ball home for a 6-0 lead.

The roles were then reversed as Junior Gyamfi then provided Emmanuel Gbejuade with a great chance, which he duly accepted. Beating the last defender he drilled his shot high into the top corner making it 7-0 with 5 minutes remaining. In the final seconds of the match, Jake Baldwin crossed and the ball landed at the feet of Jack Elsey who was on hand to beat the keeper and make the final score 8-0.
Good run out for both teams.

The 1st team have a friendly against Risborough Rangers on Thursday and the North Bucks team are at home in a League match on Saturday.