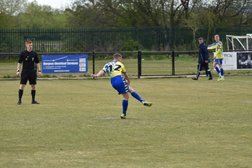 Dynamos through to Semi Finals !!

This was the Dynamos fourth match in the Gladwish Cup and after three wins, another victory here would seal a Semi-final spot.

A scrappy start with the only notable chance, a through ball from Ollie Lemon which was just too long for Jake Baldwin to catch. Lewis Workman won a corner on 6 minutes and Kevin Owusu swung the ball into the box where Sam Austin headed just over the bar. Moments later Ollie Lemon found Lewis Workman on the edge of the box but his shot went over the bar.

Aylesbury went close with a great move from the back. Terry Griffiths intercepted a ball and moved the ball wide to Emmanuel Gbejuade. He beat his man and squared to Dave Brown and he steadied himself and hit a great shot inches over the bar. Shefford started to get the ball more and a last gasp tackle from the “youthful” Ben Stevens blocked the shot. On the quarter hour mark, Shefford broke through the offside trap and had a one on one with Dan McAteer but he stood tall and made a great save.

19 minutes and Alfi Touceda was taken down in the middle of the pitch. Terry Griffiths hit a great free kick which Jake Baldwin volleyed over the bar. Neither side could break the deadlock. Alfi Touceda then collected a pass from Ben Stevens and turned his man, setting up Ollie Lemon with a great through ball. Ollie raced into the box and squared the ball, rather than shooting and the ball was cleared. 29 minutes and Alfi Touceda was struggling and was taken off with an injury, Charlie Jackson was his replacement.

Shefford then had a couple of chances which Dan McAteer was equal too, one shot he got his fingertips too, tipping the shot inches wide.
Terry Griffiths then took another free kick and this time Ollie Lemon hit a great volley, but straight at the keeper. The last action of the first half saw a rare run forward from Ben Stevens, who hit a great cross to Jake Baldwin but his shot was well saved.

Ben Stevens was straight in the action again as a Kevin Owusu swung in a corner which Ben met well with a header, but it went wide of the mark. 53 minutes on the clock and Ollie Lemon picked the ball up and passed to Kevin Owusu. He went on a great run, taking on 3 players and beating them all and hitting a shot which was well saved. 60 minutes and the match was getting heated with some tackles flying in. Kevin Owusu took exception to one challenge and got yellow carded for his complaints.

Five minutes later Jake Baldwin collected a ball from Charlie Jackson and raced off down the line, he cut inside and played in Emmanuel Gbejuade and his shot went inches over the bar. Moments later Kevin Owusu found Jake Baldwin in space and his shot beat the keeper, but hit the cross bar and went over. Dynamos were getting closer. 70 minutes and a double substitution. Ollie Lemon & Ben Stevens came off and Dan Griffiths and Luke Nugent came on.

With a Quarter of an hour left Kevin Owusu was fouled…again…but not given. The ball fell to Dave Brown and his ball into the middle ended up with Dan Griffiths a few feet from goal but he didn’t connect with the ball properly and the ball was cleared. As the match entered injury time, there was still time for a last chance. Jake Baldwin tricked his way into the box and was upended by the defender…referee gave the penalty. Charlie Jackson stepped up and smashed the ball home from 12 yards.