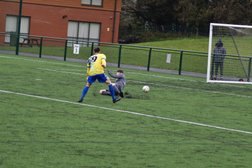 Lambeth hits a hat-trick in half an hour!!!!

Football is back !!! The Dynamos 1st team were entered into the Gladwish Spring Cup and the first match was a tough tie away at Baldock Town. After a minutes silence for Prince Philip, the match got underway. Dynamos were instantly on the attack and Alfi Touceda forced an early corner. Charlie Jackson swung the ball in and Dan Lambeth met it with a bullet header just wide of the mark.

6 minutes in and them same combination broke the deadlock. Charlie Jackson controlled the ball and sent Dan Lambeth through on goal and he easily beat the keeper to put Dynamos 1-0 up. Within a few minutes Ollie Lemon combined with Alfie Touceda and his pinpoint cross was met with a fantastic volley by Dan Lambeth which nestled in the back of the net. 2-0 Dynamos.

Aylesbury Vale Dynamos were in total control in the early stages. Another good piece of play saw Ollie Lemon flick the ball just past the onrushing Dan Lambeth. Finally Baldock got control of the ball and broke the offside trap, but a last ditched tackle from Terry Griffiths saved the day. Sam Austin had started well, but a tight hamstring saw him subbed off early for Luke Nugent. Moments later, a snap shot from Baldock saw Dan McAteer dive low to his left to save the ball.

29 minutes and Terry Griffiths played out from the back finding Dave Brown, he skipped ast a challenge and sent a great through ball to Dan Lambeth and he did what he does best. He beat the keeper and secured his hat-trick within half an hour of the match. 3-0 Dynamos. Kevin Owusu was getting some joy on the left and he combined with Ollie Lemon who crossed to Dan Lambeth who probably should have got another, but was well saved. 42 minutes and some smart defending by Kevin Owusu thwarted a rare Baldock attack. Jake Baldwin picked up a yellow card just before half time.

Within a minute of the second half starting, Dan McAteer hit a long ball over the defence straight to Dan Lambeth who jumped up with the keeper and got caught on the head. Phil Granville immediately subbed Dan and put Emmanuel Gbejuade on up top. 50 minutes on the clock and Charlie Jackson hit a great corner which Jake Baldwin controlled well, setting up Dave Brown who hit the ball inches over the bar. The Dynamos had the ball in the net when Jake Baldwin scored from an Alfi Touceda ball into the middle, but he was adjudged offside. Kevin Owusu was enjoying himself and some silky skills saw him bamboozle his marker and subsequently pulled back…yellow card Baldock player.

Baldock then had a period of pressure and only a top class save from Dan McAteer stopped a certain goal when put through. 65 minutes and they broke the offside trap again but this time Dan McAteer was stranded and lobbed from 20 yards out. 3-1 Dynamos. A couple of minutes later Jake Baldwin found Ollie Lemon and he jinxed his way over a challenge and hit a great shot which was tipped over. Charlie Jackson was next to try his luck with a superb free kick which the keeper tipped round the post. The Baldock keeper was keeping them in the game.

Less than 10 minutes left and Dynamos took control once again. Some excellent work from Ollie Lemon and he squeezed the ball to Jake Baldwin who steadied himself, beat his marker and hit a shot inside the far post to make it 4-1 Dynamos. Alfie Gaspar and Jack Elsey came on for the final few minutes for Charlie Jackson and Ollie Lemon. 87 minutes and Emmanuel Gbejuade played a great ball out to Alfi Touceda and he laid the ball back to Jack Elsey who hit a thunderous drive inches over the bar…surely Jack couldn’t hit to goals in two games…!