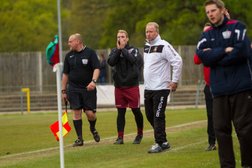 We are delighted to announce that Steve Bateman has agreed to become First Team Manager and re joins the club after five years away.

Bateman has enjoyed an illustrious non-league career, starting his playing days with Hemel Hempstead before joining Everton, where he went on to win the FA Youth Cup before later playing more than 300 games for both Chesham United and Slough Town.

His managerial career started at Chesham but he also managed Berkhamsted Town, guiding them to a memorable FA Vase final at Villa Park, and local rivals Hemel Hempstead who he led to promotion to the Southern Premier League. Bateman was appointed Aylesbury boss in 2013, replacing Craig Faulconbridge, and spearheaded a strong promotion push in 2014/15 finishing third to Royston and Kettering, Aylesbury's highest ever league position, before losing out in the play-offs to Bedworth. Bates then bought the biggest trophy back to Haywood Way when in 2016 Aylesbury defeated Chesham United 1-0 in the Berks and Bucks Cup Final at Windsor FC before departing the club at the end of that season.

He then returned to Berkhamsted, this time gaining promotion from the Spartan South Midlands League in April 2018 before two successful seasons in the the Southern League, helping them to a 6th place finish in his first season before ending season 19/20 in top place prior to the null and void decision due to Covid. Steve's then teamed up with Lee Bircham and Hemel Hempstead Town in the National League South before ending their tenure earlier this month.

We welcome Steve back to The Dynamos