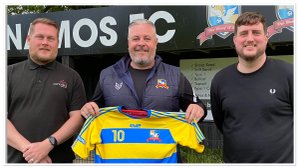 The side will be managed jointly by Michael East and Liam Dwyer. Michael will need no introduction as he was the clubs Development Manager last season winning the Suburban League Central Division at the first time of asking. Easty has been involved in football from a young age playing until fairly recently with the likes of Berkhamsted and Cockfosters

Joining Michael in managing the First XI will be Liam Dwyer Liam has joined from Step Three Kings Langley FC where he was First Team Coach last season, as the team staved off relegation to deservedly retain their Southern League Premier South status. This was his third spell with the club, previously having managed their u18 SCFYL Squad.

Liam’s started his coaching journey in grassroots football at St Albans City Youth for over five years before brief spells at Burnham FC and Amersham Town first teams. From there he moved onto coaching roles at Berkhamsted, Harpenden Town and assistant managers roles at Tring Athletic and Sarratt.

He has worked as the Physical & Mental Wellbeing Officer at Watford FC CSE Trust, as a Coach Mentor for Hertfordshire FA and is currently coaching at the PSA Academy u14s whom won a national shield. Liam was named Herts FA Coach of the Year in 2019.

Liam’s undoubted coaching skills will be of huge benefit to us, as will his knowledge and understanding of the game and levels.

Also joining Easty and Liam will be Damien Eatwell again a familiar face as part of the development team's coaching set up last season. Damo played for Winslow Utd in the 90s as well as a host of Aylesbury teams up until a few years ago. Coaching youth teams at Risborough Rangers for the last ten years and more recently our very own Dynamos Wildcats.

we welcome Liam to the club and congratulate Easty and Damo on their new roles. This has been an exhaustive process and we would like to thank all those who applied, were interviewed and showed an interest.